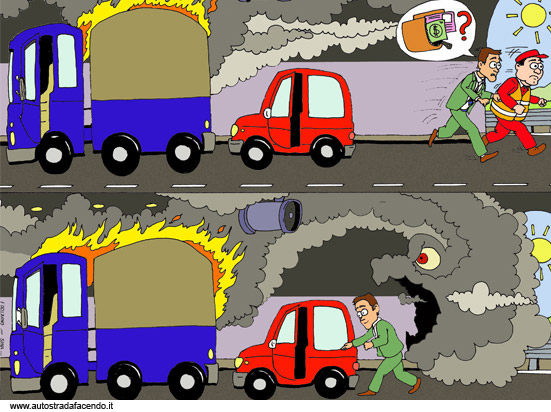 RUN! DON'T GO BACK FOR YOUR BELONGINGS!

WE 4 YOU
ASTM-SIAS Motorway Operators equipped all tunnels longer than 1,000 m with a mechanical ventilation systems.
A recently approved European directive and the Italian law confirmed the criteria so far adopted.
The ventilation systems in our tunnels are rather powerful. However, in the event of a main fire, smoke might be beyond the control of the ventilation system or the Fire brigades. In the early stages of a fire, hot smokes rise upwards; then, as they expand under the tunnel vault, they cool down and that's when they may surround you.
It is unwise to hover about in the fire scene or to go back to recover your belongings. Leave your wallet there and save your life!

When? In the event of a fire in a tunnel, especially when heavy-goods vehicles are involved.
What? Stop along the right edge of the carriageway, clear the overtaking lane and leave enough room for the rescuers to pass. Wear your reflective jacket, get out of your vehicle and don't bother about your belongings. Run along the emergency shoulders or through the by–passes leading to the next tunnel. When you're driving in open air, stop safely in a rest area or in any other safe place. Make sure you're neither on a bridge nor on a steep slope before you decide to jump over the crash barrier - very serious accidents have resulted from such decisions.
Why? Fire might damage the ventilation system. Consequently, poisonous smokes might drift over your head and surround you. A wrong BEHAVIOUR of yours could put your own life and even the rescuers' at risk.

Speed is my passion … No fear in tunnels Never drive when you’re tired Don’t ...

Secure the cargoes on your trucks Observe driving and break times

Characters in this cartoon:

Meet all the characters of the cartoons >>