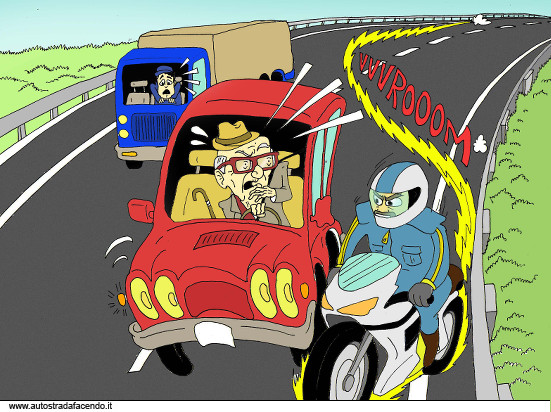 NEVER EVER MAKE A DOUBLE OVERTAKING

WE 4 YOU
ASTM-SIAS Motorways were designed with a geometry adapts to en- sure travelling comfort, speed and safety, as long as you don’t overcome speed limits. Motorway technicians are very attentive in maintaining both road markings and bed in good conditions. However, it is unfair to waste such a commitment, which is aimed at providing wide safety margins to travellers. Motorways are not a Grand Prix route, and road users are not “hurdles”, but people who are travelling in full right of mobility. If stunned by a risky manoeuvre, they could have unpredicted reactions, such as steering or jamming on the brakes. Those who are really “mad” for bikes knows it very well and comply with rules and common sense criteria, keeping themselves and those who travel around them safe. Art. 144 of the Road Code allows to travel in two parallel lines in car- riageways with at least two lanes per direction, when traffic is heavy and speed is linked to and influenced by the presence of other vehicles. Nonetheless, this doesn’t mean you can overtake here and there, as you wish. In these regards, art. 148 of the Road Code states that in roads provided with more than one lane per direction, overtaking is allowed only along the lane on the left of the vehicle you want to pass. Transgressors will be given “heavy” sanctions, including suspen- sion of their driving license. Moreover, we remind you that, thanks to special agreements between ASTM-SIAS companies and the Ministry of the Interiors, www.trip2life.com intense road patrolling is ensured on motorways by dedicated squads of Road Police.

When?
When you’re riding a bike and you see a vehicle overtaking another one.
What?
Comply with speed limits, keep appropriate safety distance, and overtake only when the overtaking lane is free. If so, overtaking on motorways is a safe manoeuvre both for bikers and drivers, no sanctions are applied and, above all, very serious accidents are prevented.
Why?
Although you think you have enough space “to do it” with your bike, the real space between the car you’re trying to overtake and guard rails may not be sufficient. The car is running and the “psycho technical” space, i.e., the space you need to pass a ve- hicle, increases with speed. A small swerve of your bike or of the vehicle you’re overtaking is enough for a crash - if a loose tar- paulin or the wing mirror “hit” the bike handlebars, the biker will be thrown down on the asphalt at 130 km/h, while their bike will fall down, crash on the running car on the overtaking lane, and another vehicle travelling along the right lane...my God! You’d rather be a little patient and wait some seconds to make a safe overtaking (with no sanctions) than gain a bunch of minutes putting your life and the others’ at risk.

Speed is my passion … No fear in tunnels Never drive when you’re tired Don’t ...

Secure the cargoes on your trucks Observe driving and break times

Characters in this cartoon:

Meet all the characters of the cartoons >>